I am taking part in the Genealogy Do-Over this year.


The Genealogy Do-Over tasks for October are:

I am already familiar with DNA testing options as I have tested with Family Tree DNA (in 2012), Ancestry DNA and LivingDNA. I have also transferred my DNA results to MyHeritage and Gedmatch.

For those already familiar with DNA testing options, Thomas MacEntee suggests for this months genealogy do-over task that we make sure we are "using all the possible tools at your disposal for interpreting and connecting with others".

The tools I currently use the most are Genome Mate Pro and DNAGedcom Client. I have also started to use DNA Painter and I am interested to try the bulk import functionality.

I have used the following Chrome extensions to help with my DNA research:
I have also used Shelley Crawford's NodeXL techniques to visualise my DNA matches from AncestryDNA. You can learn more at Shelley's blog Twigs of Yore and on the Facebook group Network Graphs for Genetic Genealogy.

After looking at many examples from other researchers I have decided on the following naming conventions for my digital files.

If the file relates to more than one person - a marriage record, for example - I will first name the file with the groom's name as follows:

Then I will create a shortcut to that file and name it for the wife as follows:

For documents related to a married woman, I will save the file under the surname used in the document but will also create a shortcut to the document using the woman's maiden surname.

After reading about Metadata I have decided on a Metadata Workflow as follows: 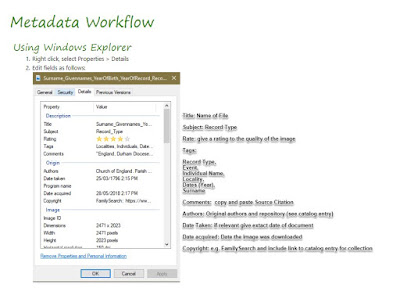 Title: Name of File
Subject: Record Type (I will progressively create a master list of record types, under the categories as described on the FamilySearch Wiki)
Rate: a rating of the quality of the image
Tags:


Comments: Source citation
Authors: original authors e.g. Registry of Births, Deaths and Marriages Victoria
Date taken: if relevant, the exact date of document/event
Date acquired: Date the image was downloaded or scanned.
Copyright: if relevant e.g. FamilySearch and include a link to the catalogue entry

I have decided to use a folder naming system based on the record types described on the FamilySearch Wiki.
The main folders, under GENEALOGY, will be:


I anticipate that most of my files will be saved in the folder "4. Original Records".
There will be subfolders within that folder as follows: 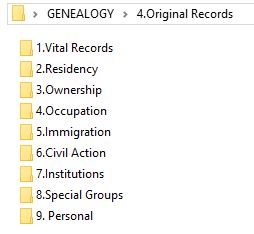 I won't have any further subfolders under these folders but I will save all relevant files under one folder for each record type. For example, in the '1. Vital Records'  folder I will save records related to any of the following (as listed on the FamilySearch Wiki) :

I will be able to sort them easily using Metadata.

If this file system doesn't work well for me I may decide to change it in the future.

The primary copy of my genealogy information will be in a folder called GENEALOGY on my desktop.
I will then use GoodSync to backup the GENEALOGY folder to a second hard drive and to the cloud.


The full list of Genealogy Do-Over topics for 2018 is on Thomas MacEntee's Abundant Genealogy web site.

© 2018. Australian Genealogy Journeys. This post was originally posted at https://ausgenjourneys.blogspot.com/2018/10/genealogy-do-over-october-2018.html
Genealogy Do-Over is © Thomas MacEntee.
Posted by A O'Brien Posted at 3:49 PM