I am late again with week 11, my NBN Internet connection has been very poor for the last week, unfortunately.

For this week's theme, Large Family, I have chosen the family of my great-great grandparents Edmund Joyce and Mary (Mulhall) Joyce.

Edmund Joyce was born in about 1833 near Whitegate, Galway, Ireland (now located in County Clare), in the Catholic parish of Clonrush, the son of Edmund Joyce and Catherine (Goonane) Joyce. Edmund's father is supposed to have died during the Famine in about 1846. Edmund's widowed mother, Catherine, immigrated to Victoria, Australia with five of her children, including Edmund, in 1855. They followed daughter Mary Joyce who had immigrated to Victoria in 1853.

Mary Mulhall was born in about 1844 in the Catholic parish of Tubberclaire, Westmeath, Ireland, the daughter of Matthew Mulhall and Margaret (Coghlan) Mulhall. Mary immigrated to Victoria, Australia in 1863.

Edmund Joyce and Mary Mulhall were married on 2 March 1867 at St Mary of the Angels Catholic Church, Geelong, Victoria. Edmund and Mary lived at Napoleons near Ballarat until 1873 when they selected land at Pannoobamawm in Northern Victoria.

Edmund and Mary had a family of 15 children - 7 sons and 8 daughters. 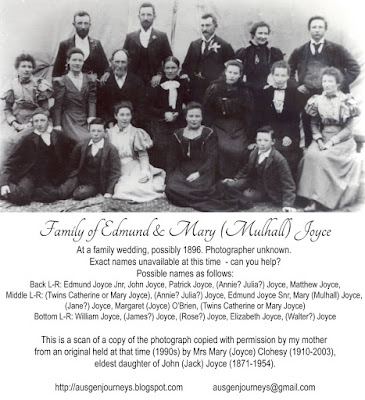 Edmund and Mary lived at Pannoobamawm until they retired to Rochester in 1913.
Edmund died at Rochester on 1 September 1916. Mary continued to live at Rochester, cared for by her daughters Mary and Rose, and she died there on 3 November 1923.