I have decided to write about an ancestor (not direct line ancestor) that I found some information about from a library. I don't often get to research at a library.
I went back through my research and discovered notes for a time I went to the National Library of Australia in Canberra in August 2008. My sister and her family were visiting Canberra and took me along for the trip.

One thing I had on my to-do list for the library was to view the Deniliquin Chronicle and Riverine Gazette on Microfilm for the period November-December 1865. My purpose in doing this was to find the original version of a news item related to the death of my 3 x great uncle, Thomas Fullerton. During my time at the National Library, I found the original notice and made a copy of it. The article was first published in the Deniliquin Chronicle, 18 November 1865, page 4, column 5.

I wrote the following about Thomas on this blog, in its previous form, on 11 September 2012, under the title Trove Tuesday - Thomas Fullerton of Hill Plain, Deniliquin.


The following article regarding Thomas Fullerton, though a very sad article, is one of my most appreciated, and least expected, Trove discoveries. I had learnt, through a reference provided by the Deniliquin & District Historical Society, that in 1865 there had been an inquest into the death of a young shepherd, Thomas Fullerton, who had died at Hill Plain near Deniliquin, New South Wales.

Unfortunately, the death certificate gave no information about Thomas' family, and while the inquest index existed for that era in New South Wales, the actual inquest records no longer existed. I thought I was not likely to find any other information to verify that this Thomas was part of my Fullerton family. My best hope was newspapers - but which newspaper? How many rolls of microfilm would I need to trawl through?

Enter the National Library of Australia's Newspaper digitisation in 2008. At that early stage in the digitisation none of the digitised newspaper titles looked relevant for Deniliquin news - perhaps the Argus, but that was a long shot I thought. Without high expectations of finding any reference to Thomas, I searched for 'Fullerton' and 'Deniliquin'. There it was! In December 1865 the Brisbane Courier had reprinted an inquest report from the Deniliquin Chronicle. The inquest report mentioned Thomas' sister Bridget Fenelon, and thus provided the evidence I needed to place young Thomas on my family tree. Until that time, Thomas' existence had been somehow forgotten in family records and oral history. Previously, the only evidence for Thomas' existence was a record of a Thomas 'Fuller' baptised at Castlemaine, Victoria in 1854. I like to think that Thomas provided a little help in my research. While the information I found about him was very sad, finding it meant that his story would no longer be forgotten.

"I take the following report from a Deniliquin paper, as it relates to a subject in which not only the faculty but all heads of families must feel an interest. Medical science has not yet reached perfection, great as its triumphs are:

"On Tuesday last the Police Magistrate attended at Hill Plains to hold an inquiry respecting the death of a lad aged thirteen years, named Thomas Fullerton, who had been found lying dead in his bed on the previous day by Mr. Clancy, sheep overseer to Mr. Hogg, of Mathoura station. The first witness examined was Bridget Fenelon, a married woman and sister of deceased, who deposed that on Sunday evening last she was milking a goat, and her brother held the animal by its horns; the goat giving a plunge forward struck deceased either in the breast or stomach, from which he appeared to suffer somewhat; he ran a few yards after the goat, and then laid down and complained of sickness, and remained drowsy the whole of the evening afterwards. On Monday, she finding him no better started for Deniliquin, and, on her return in the afternoon, found he was dead. John Clancy, the overseer deposed that being in the neighborhood on Monday, and requiring the assistance of deceased, he went to the hut believing deceased to be asleep, and found him on the bed dead and his body cold. A. W. F. Noyes, Surgeon, of Deniliquin, who attended the inquiry for the purpose of making the post mortem, deposed that he had done so, and found that the cause of death was hydatids in the heart, and that no marks of violence likely to arise from the butting of a goat were noticeable on the body. This is the second death which has been attributed here within a twelvemonth or so to that very obscure form of disease - hydatids. The former was a girl of about sixteen years, who died in the hospital, and the organ in which the hydatids were found was the brain, some four or five hundred being discovered in one side of that organ. The professional gentlemen engaged considered the features presented by that case exceedingly singular, and those of the present are viewed as being still more extraordinary and unusual. Some of the hydatids were attached to the heart, and one, which was taken out, was found floating in the blood contained in the left ventricle. The lad appears to have occasionally been subject to fainting fits, and those are supposed to have been produced by the interference of this organic growth with the action of the valves of the heart. The subject as affecting the human frame is exceedingly obscure, but the infrequency of its known occurrence commends itself to the notice of the professional man." 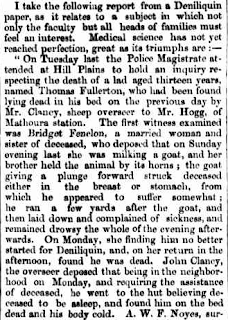 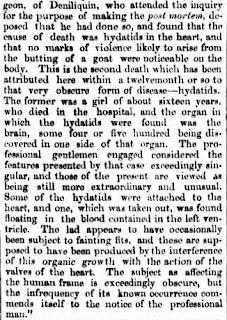 The same article also appears in the following newspapers on Trove:

Email ThisBlogThis!Share to TwitterShare to FacebookShare to Pinterest
Labels: 52 Ancestors in 52 Weeks, Fullerton