This year I am taking part in Amy Johnson Crow's 52 Ancestors in 52 Weeks blogging prompts.

For this week's theme, I have chosen to write about my 2 x great grandfather Michael O'Brien.

Michael O'Brien's name appears as the donor underneath one of the Stations of the Cross in St Joseph's Catholic Church, Rochester, Victoria. Whenever I attend Mass at that Church, I like to sit in the pew nearest to that particular Station and remember Michael O'Brien, his family and his descendants in my prayers. 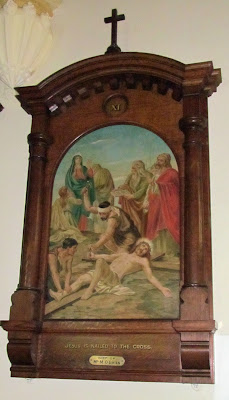 
Michael O'Brien was born about 1833 at Drumintee, County Armagh, Ireland. Michael was the son of Owen O'Brien/Breen and Bridget (Finegan) O'Brien/Breen.1

In 1851, Michael, with his parents, Owen and Bridget, and siblings Thomas, Bridget, John and Hugh resided in the townland of Aghadavoyle, Killevy Civil Parish, Armagh, Ireland. 2

Michael emigrated from Ireland to Australia sometime in the 1850s.

Michael and Eliza had the following children:
In 1872, Michael O'Brien lost his sight in a blasting accident. On 16 August 1872, the Geelong Advertiser reported on the accident:


"A serious blasting accident occurred at Mount Gellibrand, on Wednesday afternoon, to a laborer named Michael O'Brien, while at work with some others on a contract let by the Colac Shire Council, for the formation of a road between some paddocks belonging to the Hon. Mr Strachan. They were cutting through some barriers of rock, and having made a bore about twenty inches deep, O'Brien was engaged tamping, when the blast suddenly exploded in his face. The injuries resulting were of a painful, as well as serious character, the whole of his face being closely perforated with the powder, his eyes swollen to such an extent that since the occurrence he has been completely blind; two of the fingers of his right hand smashed, and the palm of the left badly hurt. He was at once conveyed to Geelong, and yesterday (Thursday) morning admitted to the hospital. Hopes are indulged that the unfortunate man will be able to regain his sight, but as yet, owing to the inflammation that has supervened, the extent of the injuries to his eyes cannot be definitely ascertained. O'Brien can only attribute the explosion to the friction of powder, for although he used an iron rod, there was fully ten inches of the tamping material, composed of the outside crust of the rock, above the charge at the time it ignited. Fifteen years ago, while digging a well on a farm, he met with a similar accident, and on that occasion narrowly escaped being deprived of his sight."3

A follow-up article in the Geelong Advertiser on 2 November 1872 detailed how fellow contractors donated money to help Michael and his family:


"A very praiseworthy act was done on Friday by a contractor, named Dixon, who applied to the Winchelsea Shire Council to allow him payment for ten yards of surplus metal, and promising, if they did so, to give the amount, £2, to his unfortunate fellow contractor, Michael O'Brien, who about six weeks ago lost his eye-sight through a blasting accident. This is indeed brotherly feeling, Dixon being only a poor man, and as the unfortunate man, O'Brien, has a large family, whom, owing to the accident, he can in no way assist, a hope has been expressed that more wealthy men, who have not yet done so, will forward contributions to the surveyors of the Winchelsea or of the Colac Shire Council. We understand that Mr G. F. Belcher will be happy to receive subscriptions in Geelong." 4

At that time Michael and his family lived at Karngun, near Winchelsea, Victoria, on land adjoining that held by good friend James Watson. In 1873, both Michael O'Brien and James Watson selected adjoining blocks of land in the parish of Pannoobamawm and moved their families north in 1874. Michael and Eliza spent the rest of their lives in that area of northern Victoria. 5


"The Seiersen girls spent much time with the old people and Josephine Renfrey (O'Brien) as a young girl did accompany them in this task. Josephine told me that Michael remained a very upright Irish Catholic - he loved his mother, had disagreements with his father who may have been a 'north' man and was hostile to his sister Bridget for marrying in the Presbyterian Church. During his last years his routine was: early morning Mass if somebody could take him, light the fires at home, gather the eggs, have breakfast and then walk around his surrounding verandah saying the Rosary - probably 15 decades."5

A Codicil to the Will dated 26 November 1924 changed this bequest slightly,


"I direct that the two legacies of twenty pounds each left to the Parish Priest of St Joseph's Church Rochester shall be reduced to fifteen pounds each and I bequeath ten pounds to the Mother Superior Brigidine Convent Rochester."6

Other bequests show a charitable nature and a concern that Masses be offered for the repose of the souls of others in his family:


"To the Parish Priest of Werribee a sum of ten pounds for masses for the repose of the soul of my brother Thomas O'Brien and my sister Mary O'Brien late of Werribee To the Treasurer or other proper officer of the Order of Crusaders of the Holy Land Commissariat, The Friary, Waverley, Sydney, a sum of nine pounds being one pound each for masses for the repose of the souls of the following persons - my father Owen O'Brien my mother Bridget O'Brien, my brother Hugh O'Brien, my brother John O'Brien and his wife Margaret both late of Bendigo, my sister Bridget Shaw late of Bunbury Western Australia, my wife Eliza O'Brien, and myself Michael O'Brien - and my son Michael late of Pine Grove. To the Treasurer of the Broadmeadows Orphanage a sum of six pounds ten shillings To Charles Gleeson of the Presbytery Rochester Student a sum of five pounds."6 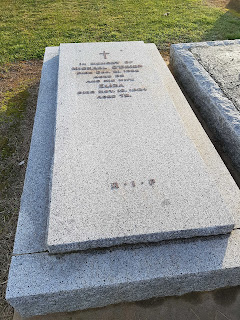