For this week's theme, I have decided to share a newspaper report from 1896 of the wedding of my great grandparents Owen O'Brien and Margaret Mary Joyce.

A very interesting ceremony took place at the Tennyson Roman Catholic Church last Monday, when Miss Maggie Joyce, eldest daughter of Mr. E. Joyce, of Pannoobamawm, was married to Mr. O. O'Brien, a well-known resident of the Tennyson district. The church was tastefully decorated for the occasion, and as the day was all that could be desired it tended in no small way to make the surroundings of the wedding pleasant and enjoyable. The marriage ceremony was performed by the Rev. Father Mulquin, The bride was attired and looked well in cream crepon, trimmed with passementerie and lace, with the usual wreath and veil, and her travelling dress was brown serge, with hat and cape to match, The bridesmaid, Miss Annie Joyce, sister to the bride, wore a neat costume of brown serge, trimmed with passementerie, with lace hat to match. Mr. M. O'Brien acted as best man. After the ceremony was concluded, a large number of friends drove to the residence of the bride's parents, where the wedding breakfast was laid out in a sumptuous manner in a large marquee erected for the purpose. The Rev. Prior O'Hanlon presided, and in proposing the toast of "The Bride and Bridegroom," referred to them in complimentary terms and wished them a long and happy life. The toast was suitably responded to by the bridegroom. The other toasts proposed were—"The Bridesmaid," by Mr. Seierson; " The Bride's and Bridegroom's Parents," by Cr. Allan; "The Ladies," by Mr. T, O'Brien; and "The Clergy," by Mr. P. Joyce. They were responded to respectively by Mr. M. O'Brien, Mr Joyce, senr., Mr. O'Brien, snr., P. Joyce and the Revs. Prior O'Hanlon and Father Mulquin.
After the wedding breakfast the happy couple departed amid the cheers and good
wishes of the bystanders to catch the evening train at Prairie, en route to Gippsland, where the honeymoon is to be spent. None of the ordinary accompaniments to such a departure were forgotten - rice and old shoes being thrown after the retreating couple. The presents were numerous and handsome, testifying to the high esteem in which they are held by their many acquaintances. As is usual on such occasions the guests indulged in dancing and other customary amusements until the early hours of the morning reminded them that it was time to be journeying homewards."

A shorter version of a similar notice had appeared in the Bendigo Advertiser on 8 August 1896. 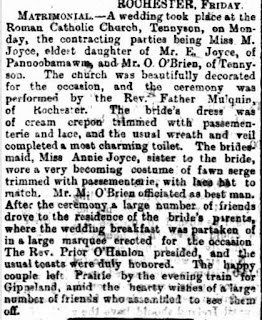 Matrimonial - A wedding took place at theRoman Catholic Church, Tennyson, on Monday, the contracting parties being Miss M.Joyce, eldest daughter of Mr. E. Joyce, of Pannoobamawm, and Mr. O. O'Brien, of Tennyson. The church was beautifully decorated for the occasion, and the ceremony was performed by the Rev. Father Mulquin,of Rochester. The bride's dress was of cream crepon trimmed with passementerie and lace, and the usual wreath and veil completed a most charming toilet. The bridesmaid, Miss Annie Joyce, sister to the bride,wore a very becoming costume of fawn serge trimmed with passementerie, with lace hat to match. Mr. M. O'Brien officiated as best man. After the ceremony a large number of friends drove to the residence of the bride's parents,where the wedding breakfast was partaken of in a large marquee erected for the occasion.The Rev. Prior O'Hanlon presided, and the usual toasts were duly honored. The happy couple left Prairie by the evening train for Gippsland, amid the hearty wishes of a large number of friends who assembled to see them off."